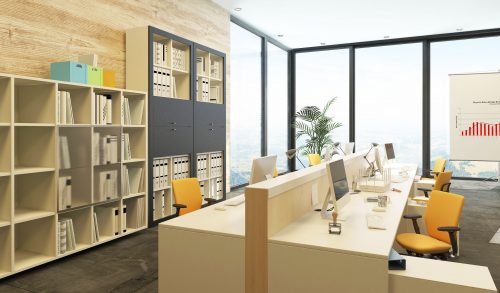 You are here: Home / Uncategorized / Office space and the open-plan era: what really works?

But in a world made up of introverts, extroverts and, indeed, ambiverts how are companies accommodating for all?

ARE YOU SITTING at your desk this morning in an open-plan office? Surrounded by a team of people that, had you not been chosen for the job, you may never have a particular desire to be in such close proximity with?

You see, that’s the problem with these cool, open-plan layouts. They look great and, of course, we know that their tradition lies in the company wanting a non-hierarchical structure. But in a world made up of introverts, extroverts and, indeed, ambiverts how are companies accommodating for all?

The open-plan offices and cubicles were invented by architects and designers who were trying to make the world a better place – who thought that to break down the social walls that divide people, you had to break down the real walls, too. It was Frank Lloyd Wright, the modernist architect, who attempted to soften the harsh working conditions laid down by the Taylorist principles of splitting tasks (and workers) into specific repetitive acts; these regimented spaces enabled an uninterrupted flow of work and more desks could be fitted into open areas than cellular rooms.

Wright’s hatred for walls in an office space quickly caught on and offices took on a new design of open-plan. It was followed in the 1950s by Quickborner, a German design group, who broke up the rows of desks into more organic groupings with partitions for privacy.

But these architects and designers forgot one thing – what about the introverts? How will they survive without their quiet spaces to think? And what about the extroverts who may be working in a small, cramped office space and need group energy to stay engaged during the working day?

In my former role as a career coach I met many people who found themselves exhausted from work and the daily barrage of loudness and general chaos in their workplace. Each day they went in full of energy, and by mid-morning the familiar slump and elevated stress levels started to appear again.

As I would listen and watch their complete frustration of not being able to get their work done properly due to falling concentration levels and cognitive overload, something struck me. Having recently finished reading Susan Cain’s book Quiet: The Power of Introverts in a World That Can’t Stop Talking, I had the lightbulb moment.

You see, many of these people thought that they should be moving on from their role and, maybe even changing careers, because they just couldn’t get on top of things in the office. But when we took a more introspective look at their own patterns and behaviours it quickly became apparent that they were somewhat of an introvert with extrovert tendencies. They prefer the quiet and working on their own when faced with deadlines, and needs the time to think in order to function best and get the job done. But nobody has ever noticed this and the office chatterboxes who assume a completely different role to theirs are literally driving them mad with their incessant chatter every day.

Here are people ready to leave their jobs all because of what they think is their inability to get their job done properly and on time, when in fact constant interruptions means she they are becoming increasingly distracted. So it begs the question; how many more people are like them, stressed from the work environment rather than the actual job itself?

Things are changing for the traditional office

A recent study conducted by The University of Exeter’s School of Psychology revealed that if employees are involved in the design and layout of a workspace, they are not only happier and healthier, but are 32% more productive: “When people feel uncomfortable in their surroundings they are less engaged – not only with the space but also with what they do in it. If they can have some control that all changes, and people report being happier at work, identifying more with their employer, and are more efficient when doing their jobs.”

With companies such as Google spending $1 billion to develop office space in London, which will include 1 million square feet of an indoor football field and open air swimming pool, to GIY Ireland’s latest initiative “Give peas a chance” to encourage workplace wellness by growing your own vegetables at your desk, things are changing for
the traditional office.

Companies who fail to include the work environment in the “company culture” agenda will lose out and will lose valuable staff. So if you’re still at your desk, ask yourself where you are happiest working. If that chatterbox wasn’t literally in your ear every day would you get more work done? Or if you’re on your own with nobody to talk to, bring yourself closer to the action and see if you are re-energised. A few simple layout changes may be all it takes to make you more productive and happier in your job.

Eating lunch at your desk won’t earn you brownie points with your bos...
Scroll to top
We use cookies to improve your experience. You can opt out if you wish. ACCEPT
Privacy & Cookies Policy

Any cookies that may not be particularly necessary for the website to function and is used specifically to collect user personal data via analytics, ads, other embedded contents are termed as non-necessary cookies. It is mandatory to procure user consent prior to running these cookies on your website.